Looe and Polperro, the Tamar Valley and the Sound of Drake's Drum

Two lovely rivers and the magnificent landmass of Dartmoor define this region geographically. The Looe river and the River Tamar each wind their way through beautiful valleys - and the Tamar is the natural border between Cornwall and England (well, Cornwall & Devon, if you are so minded).

And the area is steeped in history - Sir Francis Drake was born and bred near Tavistock (on the western edge of Dartmoor) and from Plymouth Sound he set off in 1588 (after he had finished his game of bowls) to defeat the much larger Spanish Armada. He went on to circumnavigate the world in his galleon the Golden Hind - and he was probably the first person to sail through the Magellan Straits - there is evidence that he was there 20 years before Magellan (we won't go into that! - source: American Maritime Society).

We start at St Cleer and Minions, where we find the St Cleer holy well, the Neolithic chamber tomb of Trethevy Quoit, the decorated and inscribed King Doniert's Stone (which was probably erected for King Durngarth, the last Cornish king to be recorded, who drowned in AD 875), and the three stone circles known as 'The Hurlers'.

Travelling over to Gunnislake and Calstock, we are at the head of the tidal part of the River Tamar. Once - in C19th - it was a busy thriving industrial area but now all is calm, and what is left of C19th industry only serves to add character and interest to the landscape. If its your interest, visit a site about "Mining at the head of the Tamar Valley" - and with links to other sites.

And another site which is all about the Tamar Valley.

Down river now - and not very far, either - to The National Trust property of Cothele House.

An Elizabethan House, kept much as it was, and well worth a good look around. The River Tamar here is at it's most beautiful and there is a restored C19th trading vessel - the Shamrock - alongside the quay.

A lovely house and gardens - but at it's best when the daffodils are out.

Heading on down river, we pass St Mellion Golf Club (two championship courses, one designed by Jack Nicklaus) and several strangely named - but good - pubs. One called the "Who'd have thought it"! 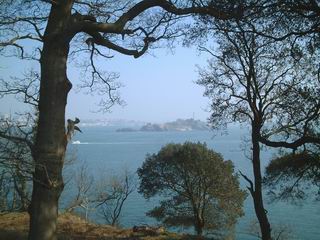 Plymouth, the Barbican, the Mayflower steps and Plymouth Hoe beckon, but for the purpose of this little tour, we remain in Cornwall, drive around to Torpoint, Millbrook (click to see where we are), Cremyll and Mount Edgcumbe House, which was built by the Edgcumbe family, who also built Cothele (they've been around a while!). A visit could be made to Mount Edgcumbe - see opening times.

Picture is of Drakes Island, taken from Ravenness Point, which is about a half mile walk along the coastal path out from Mount Edgcumbe.

In the distance 'leftish' is Plymouth and Plymouth Hoe.

Plymouth Breakwater and the English Channel are on the right - out of picture.

Travelling west along the coast, we go through Freathy, down to Portwrinkle and on to Seaton - and on again to Looe 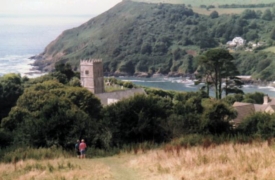 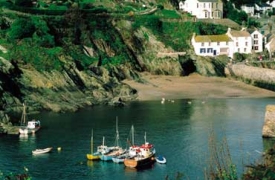