Starting from Truro ... but we can start at your hotel/B&B from anywhere in Cornwall... 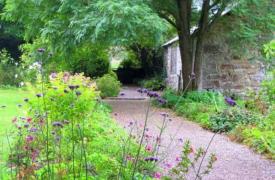 Sight-seeing en route at Mylor Harbour, Flushing and in Falmouth, including a look at Pendennis Castle (built by Henry VIII to repel the Spanish and scene of a long siege during the English Civil War 1642 - 1648)... and on to Trebah Garden for their 10am opening.

Taking the King Harry Ferry, cross to the Roseland Peninsular, visit St Just-in-Roseland Church... wonderful garden... take a look at St Mawes and St Mawes Castle, and head for Mevagissey and The Lost Gardens of Heligan in time for their 10am opening. Travel to Bodmin Moor, passing Colliford Lake and Dozmary Pool (where King Arthur's sword Excalibur last saw the light of day), take a quick look at Warleggan Church and St Neot's Church, whose stained glass windows survived Oliver Cromwell when most others did not. Take a look Gunnislake and Calstock (peaceful, eclectic areas, which were once bustling hives of activity at the tidal head of the beautiful River Tamar valley) and continue to Cotehele House and Gardens, on the hillside overlooking the river, in time for their 11am opening. The Eden Project, getting there in good time for their 10am opening... and hoping to avoid the queues... midweek is best. 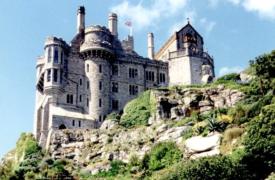 St Ives and Penzance, sight-seeing en route and in St Ives, including a look at the St Ives Tate Gallery, the Egyptian House in Penzance... and on to St Michael's Mount for their 10am opening (garden opens at 10am; house opens at 10.30am).

Tours tailored to fit your exact requirements - we'll help you plan it.

The Eden Project
Near St Austell. A fantastic site set in five massive Biomes... a very large, fascinating Project... and attracting visitors from all around the world. The Number One garden destination in the UK.

Trewithen Gardens
Near Truro. Enjoy the peace of these magnificent gardens with their outstanding collections of magnolias, camellias and rhododendrons... as well as other rare trees and shrubs.

The Lost Gardens of Heligan
Near Mevagissey - 19th Century gardens now restored to their former glory. Semi tropical setting on the south coast near Mevagissey. Well worth a visit.

Trewidden Gardens
Near Penzance. One of the largest and finest selections of camellias in the country. The chief architect of Trewidden Garden was Thomas Bedford Bolitho who started in 1880 to plant a unique collection of trees and shrubs, thus creating one of the finest informal gardens in south-west England with magnolias rhododendrons and camellias.

Tresco Abbey Gardens
Isles of Scilly. All in all, this garden is home to species from 80 countries, ranging from Brazil to New Zealand and Burma to South Africa... by building tall wind-breaks, Augustus Smith channelled the weather up and over the network of walled enclosures he built around the Priory ruins...

Trebah
Near Falmouth, is a garden for all seasons, with year round colour and scent. It has something for everyone with The Gallery Shop, Planter's Café, and Garden Shop... and is a 'must' for Garden enthusiasts (TourWebEditor)

Tresillian House
Set in 20 acres of grounds, this privately owned and elegant country house, provides a dramatic and imposing impression, as it breaks into view, when approached by the eastern drive with its coloured borders interspersed with ancient granite staddle stones... And the website for RJHarris, the owner and Head Gardener at Tresillian House, for whom it is a labour of love!... well worth a look!(TourWebEditor)

Cotehele
By the Tamar River. An ancient and romantic place, hidden in woodland above the River Tamar. Formal and informal gardens, with pools, dovecote and tower... wonderful display of daffodils in early spring.

Glendurgan
Near Falmouth. A garden of three valleys, that reaches down to the sparkling waters of the Helford River. For the serious gardener, Glendurgan is a veritable treasure chest of delights around every corner.

Lanhydrock
Near Bodmin. The grandest and most welcoming house in Cornwall, Lanhydrock is superbly set in 450 acres of woods and parkland running down to the Fowey river and encircled by formal and woodland gardens, lovely in all seasons.

Pencarrow
A Georgian house with 50 acres of Grade II* Listed Gardens, must be one of Cornwall’s finest stately homes. It is still privately owned and lived in by the Molesworth-St Aubyn’s whose ancestor, John Molesworth purchased the estate in the reign of Queen Elizabeth I.

St Michael's Mount
Near Penzance. The jewel in Cornwall's crown, this magical island has a church, a medieval castle (home of the St Aubyn family for over 300 years), an exotic garden clinging to the steep flanks, and an ancient harbour where you will find shops, restaurants and an audio-visual presentation on the history of the Mount.

Trengwainton
Near Penzance. A very mild climate and a renowned collection of trees & shrubs makes Trengwainton a plantsman’s dream-garden. Many of the species growing here originate from the plant-hunting expeditions on the 1920s, and the garden includes some of the largest tree ferns in the West Country. The magnolia garden with champion specimens opens in March & April.

Trerice
Near Newquay. A delightful small Elizabethan manor house, Trerice is an architectural gem hidden away from the world in a web of narrow lanes and still somehow caught in the spirit of its age. Behind the Dutch-style gabled façade are ornate fireplaces, elaborate plaster ceilings and a collection of English furniture of the highest quality.

Trevarno House
Near Helston has a history stretching back to 1246 when owner Randolphus de Trevarno gave the estate its name. Owned by a series of notable families since that time, the enchanting combination of mature woodland blends with more formal areas such as the Italian Garden, Grotto, Cascade and Victorian Boathouse to create a magical and memorable experience for all visitors.

Bosvigo
3 acres of intimate gardens surrounding the charming, mainly Georgian house (not open to the public). Bosvigo specialises in hellebores and there are also some interesting pulmonarias. The plantsman will find much of interest in this immaculately kept garden. The nursery also has interesting perennial and herbaceous plants for sale.

Famous Headland Garden
Near Fowey. A splendid cliff garden is bounded by the sea on three sides. The magnificent 1.5 acre site is 100 feet above sea level and the views are spectacular... inland towards Fowey Harbour, out across the entrance to the harbour and out towards the English Channel.

Mount Edgcumbe
Stunning Tudor home of the Earls of Mount Edgcumbe. The house and the surrounding grounds have spectacular views over Plymouth Sound, one of England's finest natural harbours. The Earl's Garden was created beside the Tudor House in the 18th century... and the Formal Gardens were created over 200 years ago in the English, French and Italian styles. One of Cornwall's very best gardens!